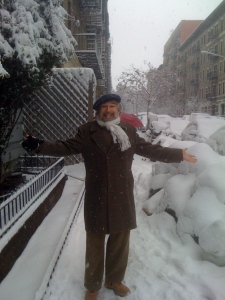 I’ve always loved the snow, playing in it, making snow men, throwing snowballs especially sledding down the packed-snow streets of the quiet NY suburb where I grew up. And of course who doesn’t love snow days, those surprise holidays, official invitations to do what you want, no guilt?

In my thirties I had the joy of reliving all these pleasures as a Dad, doing my paternal duty by sliding down hills in Connecticut with Jenny. Then came the sad moment a decade or so later when adult Jenny and I found ourselves guiltily sipping Cappuccino at an outdoor café on Broadway in mid-December and ruefully enjoying the capitalism-induced global warming I had been ranting about in various revolutionary tracts and meetings.

So this morning as the big flakes swirled by my window I felt a childish joy at all this sudden pristine whiteness covering the rare trees in my West Harlem back alley. (See photos).
Then I turned on the news at http://www.democracynow.org/ and was suddenly reminded that there is a heat wave and huge drought in the Western US, while the Winter Olympics in Sochi are slopping through mud under 60° F heat and Great Britain is experiencing record floods. I felt like I was living through what we mid-Century kids used to call ‘the end of the world.’

Catastrophic climate change is full of paradoxes as new climate records are set every year in different parts of the globe, with Alaska hotter than Georgia this winter. However, the overall trend, and underlying cause of change is global warming, mostly caused by burning carbon fuels. It is accelerating faster than even pessimists like me imagined as oil and coal production keeps increasing thanks to mammoth profits, profits huge enough to keep the subject of global warming and climate change from being mentioned in the mainstream media, even during this snow emergency when the weather nearly monopolizes the news.

For everything you need to know about climate change and the growing resistance to it, tune in to this interview with reasonable, sober Bill McKibben, the environmentalist who first blew the whistle on the disaster of man-made climate change with his book The End of Nature (1989) and who heads up the international campaign, 350.org (or you can read a printout below).
http://www.democracynow.org/2014/2/13/this_should_not_come_as_a
According to McKibben winter is on its way out.

That’s it, bye bye winter. Climate models based on current trends predict that in a few decades there may not be any place cold and snowy enough for the Winter Olympics. No more snowballs, sleds, snowmen, skiing.

So even though this record-breaking New York Winter has been hard on my arthritis and sinus, I am somehow glad that I decided to stay here out of nostalgia for the snow (even though I did get much more Winter than I bargained for!).

It was my chance to say Goodbye to Winter.
***
PS
Mark Twain famously quipped ‘Everybody talks about the weather, but nobody ever DOES anything about it.’ That’s no longer true. There is an international network of well-informed people seriously committed to fighting the oil companies and saving the planet before it become uninhabitable. It is called by the wonky name 350.org/ (350 parts per million of atmospheric carbon being the limit the planet can bear) and its slogan is ‘building a global climate movement.’ I just signed up. Maybe you will too, or pass on the message to your friends.
According to 350.org founder, Bill McKibben, the movement to block the KeystoneXL pipeline is at a watershed moment, with an all-out effort to shame Obama into denying the permit to bring dirty tar-sands oil from Canada across the US to ports in the Gulf where it will be exported to Asia. In 2008 Obama ran on ending the dictatorship of petroleum, but his the worst record of giveaways to the oil and coal companies of any President. The President has the power simply to deny the permit. A drop in the bucket, perhaps, but from small victories grow movements.
As I finish this ‘blog’ the rain and warm air have come in to melt this morning’s snow. I’m feeling blue, but glad I joined 350.org. Maybe you’ll join too. Got a better idea? Yes, of course, overthrow capitalism. But we’ve got to start somewhere and engage with the real world.
Courage!
Richard